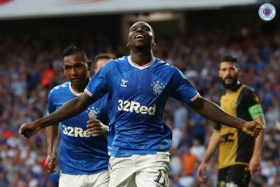 Scottish Premiership side Rangers are on the verge of qualifying for the next round of the Europa League  after claiming a 2-0 victory over Progres Niederkorn on Thursday evening, thanks to goals from two Nigeria-eligible players.

Joe Aribo and Sheyi Ojo were the heroes for Steven Gerrard's side, finding the back of the net in the 20th and 54th minute respectively.

Aribo curled home a beauty from 20 yards to give Rangers the deserved lead, his second goal in as many matches in the Europa League qualifiers.

The young Liverpool-owned star seems to have returned back to the form that made him a fan favorite during his early days at Anfield some seasons ago.

Up next, Rangers will face Derby County in a friendly on Sunday, before they travel to Luxembourg for the return leg of the Europa League second qualifying round.