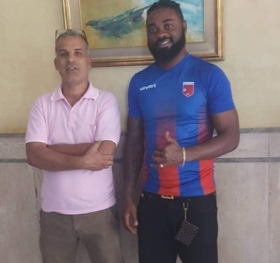 Tunisian Ligue 1 side US Tataouine have completed the signing of Nigeria international Lukman Haruna.
The attacking midfielder was unemployed for more than a year following his departure from Lithuanian club FK Palanga.
Haruna has also played in Kazakhstan, Ukraine, France and Russia.
The 28-year-old started his professional career at Monaco before transferring to Dynamo Kiev, where he spent six years.
He enjoyed loan spells at Hoverla Uzhhorod, Anzhi Makhachkala and Astana during his Dynamo Kiev days.
The Moderate Stars product was the youngest player named to the Super Eagles squad at the 2010 World Cup in South Africa and was a world champion at U17 level with the Golden Eaglets in 2007.
Igho Kingsley
Photo Credit : akherkhabaronline.com