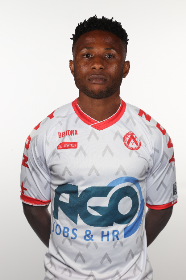 The 2019/2020 season of the Belgian Pro League kicked off on Friday evening with champions Genk defeating Kortrijk 2-1 at the Liminus Arena with two Nigerian players in action and a third an unused substitute.

Ajagun wore the jersey number 8 for his club and was lucky not to be yellow carded in the 47th minute when he handled the ball in Genk's half.

Referee Erik Lambrechts awarded only a free-kick to Genk in that situation without reaching out for a card.

Ajagun was not the only Nigerian who played for Kortrijk as former Nigeria U-23 star Imoh Ezekiel came off the bench in the 71st minute to replace Ilombe Mboyo, a Belgian international of Congo DR descent.

On the substitute bench of Genk was former MFM striker Stephen Odey who was unused throughout the duration of the game.

The striker moved from FC Zurich this summer and apparently is bonding with his new teammates as there was high fives and embraces all round by the Genk players at the end of the season opener.