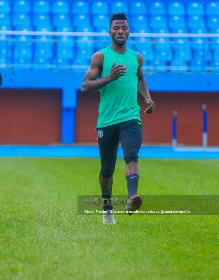 After his goal against Cambridge United ended a run of 30 games without finding the net, Leicester City striker Kelechi Iheanacho continues to make his case for a recall to the national team after netting a brace against Rotherham United on Saturday afternoon.
The former Manchester City starlet was omitted from Nigeria's traveling party to Egypt for the Africa Cup of Nations and was not on the roster for the last AFCON qualifier vs Seychelles.
The Foxes drew 2-2 with Rotherham United in a pre-season friendly at New York Stadium, courtesy of a brace from Iheanacho.
His first goal came in the 12th minute, when he slotted a finish beyond Daniel Iversen from inside the area and was unlucky not to add to his tally six minutes later as the goalkeeper tipped his effort around the post.
On 72 minutes, Iheanacho found the top corner from close range to make it 2-1, before Michael Ihiekwe leveled matters for the Millers nine minutes from time.
Iheanacho was in action for the entirety of the game, while Matt Olosunde, Joshua Kayode and summer signing Freddie Ladapo featured for the home team.
Igho Kingsley