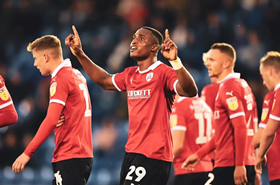 Former Chelsea trialist Victor Adeboyejo had a dream debut for Bristol Rovers, netting the winning goal in their 1-0 victory against Plymouth Argyle on Saturday afternoon.
The Ibadan born striker came off the bench in the 73rd minute and was celebrating his first goal in a Bristol Rovers shirt ten minutes later.
The Pirates had announced the signing of Adeboyejo on a long-term loan from Barnsley FC on Friday.
Last season, the 21-year-old made only two league starts for Championship new boys Barnsley and based on his performance today, he's hoping that he has convinced manager Graham Coughlan that he's capable of leading the attack when they face Blackpool in their league opener next Saturday.
Prior to his move to Barnsley in 2017, he trialed at Chelsea but nothing came out of it.
Adeboyejo previously played for Arsenal, Charlton Athletic and Leyton Orient among others.
Igho Kingsley
Photo Credit : bristolrovers.co.uk