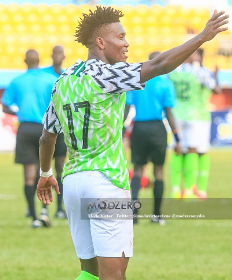 Nigeria U-23 Eagles striker David Okereke began his Belgian Pro League career at Club Brugge on a bright note as he scored one of his team's goals in a 3-1 win over Waasland Beveren at the Freethel Station Saturday night.


Okereke moved to Brugge  this summer from Italian Serie B outfit Spezia.
The U-23 Eagles striker scored from a rebound after the opposition goalkeeper Lucas Pirard parried a Ruud Vormer's shot to his path.

Okereke was in action for 80 minutes before he was substituted off  by Siebe Schrijvers.

However he might have grabbed a brace shortly before then had Arnaut Danjuma Groeneveld, the Dutch forward with a Nigerian parent passed the ball to him rather than hoping to score from an acute angle.

Another Nigeria U-23 international Dennis Bonaventure Emmanuel was in action and actually had a good game creating a couple of good scoring chances for his teammates.

Dennis was taken off in the 64th minute and replaced by Thibault Vlietinck. Groeneveld  also did not finish the game as well as he was subbed off towards the end of the match.