...the complete Nigerian football portal
Subscribe
Jamie Vardy And Two Other People Should Be Happy With Iheanacho's Form
Published: July 29, 2019 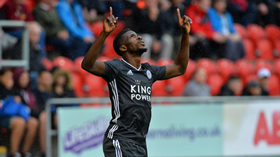 Having scored three goals from two pre-season matches, it is saved to say that Super Eagles striker Kelechi Iheanacho is back to form for Leicester City ahead of the upcoming season.

Last season was one to forget for the 22-year-old forward who scored just two goals from 35 matches in all competitions, and he was ignored by Rohr while revealing his final AFCON squad in June.

As the 2019-20 Premier League season is set to begin, these three people will be very glad to see the former Manchester City return to form now.

Leicester City striker Jamie Vardy has been the Foxes undisputed leading striker since their promotion to Premier League in 2014-15 season and has shouldered the club's goalscoring burden.

Though Iheanacho's newfound form doesn't mean the England international won't be Brendan Rodgers' marksman, the 32-year-old striker will be happy to share the burden with the Nigerian star.

The former Celtic manager will be happy that the player is beginning to justify the faith he has in his quality.

It should be recalled that Rodgers reaffirmed his faith in Iheanacho's  goalscoring prowess after he missed a clear-cut chance against Manchester City last campaign.

Apart from seeing Iheanacho justify the trust he has in him, Rodgers will be happy that the striker is ready to play a huge role in his quest for success in the upcoming season.

The gaffer was forced to commence an unplanned search for new centre-forward due to Ighalo's retirement from international football.

With Iheanacho's current form, the scouting assignment is made simple for the gaffer who only needs to recall the young man back into the team.

Rohr will be happy with Iheanacho's red-hot form and will hope he maintains the tempo throughout the coming season.