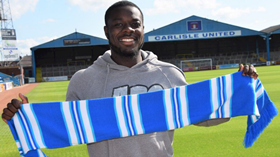 EFL League Two club Carlisle United have announced the signing of former Arsenal youth-teamer Olufela Olomola on a season-long loan from Scunthorpe United, subject to clearance of all relevant paperwork.
Scunthorpe United have an option to recall the 21-year-old striker in the January transfer window.
A former Southampton U18 captain, Olomola spent time on loan at Yeovil Town whilst at The Saints, and returned for another loan spell at the Glovers last season.
Speaking to the official website of Carlisle United, manager Steven Pressley said on Olomola : ''Olufela is one of three we’ve been trying to bring in, and I’m delighted that we’ve got him over the line.

''He’s a player who had a really good period in his career at this level when he went to Yeovil, so he knows what this division is about.
''He scored seven goals in 18 starts when he was with them and that earned him a very good move to Scunthorpe.''
In 38  appearances in the League Two, Olomola has been involved in 16 goals (10 goals, 6 assists).
Ifeanyi Emmanuel
Photo Credit : carlisleunited.co.uk