...the complete Nigerian football portal
Subscribe
MLS Team Of The Week : Nigeria U23 International In The 18
Published: July 30, 2019 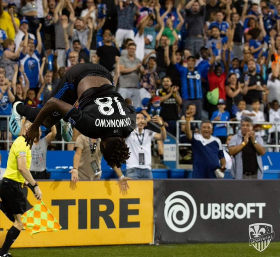 Nigeria U23 international Orji Okonkwo has narrowly missed out on a spot in Major League Soccer's Team of the Week for the latest round of matches in the American top flight.
The Montreal Impact starlet was named among the seven substitutes picked by the official website of MLS.
Okonkwo had been in contention to be selected in the Team of the Week after arguably his best performance in a Montreal Impact jersey, netting a brace in their 4-0 demolition of Philadelphia Union on Sunday, July 28.
The Bologna loanee doubled Montreal Impact's lead on 36 minutes with a well placed shot, before slotting into the bottom corner to make it 4-0 after 65 minutes.
Okonkwo made the Team of the Week bench along with Vito Mannone, Nick Lima, Everton Luiz, Carles Gil, Diego Valeri and Nick DeLeon.
Two of his teammates in the shape of Lassi Lappalainen and  Zachary Brault-Guillard were chosen in the ceremonial MLS eleven containing the best players in the division.
Ifeanyi Emmanuel
Photo Credit : impactmontreal.com