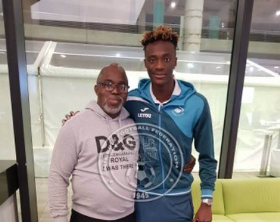 If Tammy Abraham's Instagram bio is anything to go by, the Chelsea striker is still open to representing the Super Eagles after recently adding a Nigeria flag to his profile.
Super Eagles manager Gernot Rohr is believed to be searching for a new number nine following the retirement of Odion Ighalo after the Africa Cup of Nations and the Chelsea Academy product fits the bill.
Nigeria Football Federation president Amaju Pinnick had claimed back in 2017 that Abraham had pledged his international future to Nigeria after meeting with the striker and his representatives in London, only for the player to deny that he was switching allegiance to the three-time African champions.
Though Pinnick had claimed that he had a close relationship with Abraham's father, he was unable to persuade the youngster to play for the national team at the 2018 World Cup.
Two years have now passed since that controversial incident and the 21-year-old has not been cap-tied by the Football Association, meaning the Nigerian Federation are still in the race for his services.
The likes of Harry Kane, Marcus Rashford, Callum Wilson, Danny Welbeck and Raheem Sterling are ahead of Abraham in Gareth Southgate's pecking order of strikers, but that could change if he has a good start to the season.
The England U21 star has scored an impressive 60 goals in 130 games as a professional.
Ifeanyi Emmanuel
Photo Credit : thenff.com