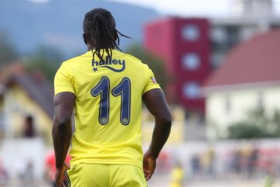 Former Nigeria international Victor Moses has been allocated his preferred shirt number at Fenerbahce ahead of the 2019-2020 season.
In the second half of last season, the winger wore the number eight kit following his 18-month loan move from Chelsea.
Moses has switched shirt number from 8 to 11 and wore the number in pre-season games against Boluspor, Bursaspor, Wolfsburg, Hertha BSC and Bayern Munich.
Turkey international Mehmet Ekici wore the number 11 on the back of his shirt for Fernabahce last season but he is now in the possession of the number 8 kit worn by the Nigerian last season.
Although Moses is predominantly a right winger, his preferred jersey number is 11 and he played with the number during his time with the Super Eagles, Crystal Palace and Wigan Athletic.
The 28-year-old played with the number 12 at Liverpool, wore the number 13 and 20 jerseys at Stoke City and West Ham respectively.
Ifeanyi Emmanuel
Photo Credit : fenerbahce.org
Latest News