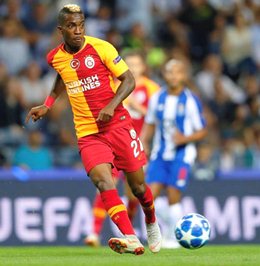 Nigeria international Henry Onyekuru is being linked with an imminent move to Monaco.
According to L'Equipe, the Principality club are in the market for offensive players and are on the brink of signing Everton-owned winger Onyekuru.
A transfer fee of seventeen million euros is being mooted and it is claimed that the player has been offered a five-year contract.
Onyekuru could replace Monaco's Colombia hitman Radamel Falcao who is reportedly close to a switch to Galatasaray.
The Turkish Super Lig champions are among the teams interested in signing the Nigerian this summer but it appears they are lagging behind Monaco in the race for his services.
Monaco sent their representative to monitor Onyekuru in the Istanbul derby between Galatasaray and Fenerbahce in April 2019 and the Super Eagle seems to have impressed their scout thanks to his goal in the 66th minute.
Ifeanyi Emmanuel
Photo Credit : galatasaray.org