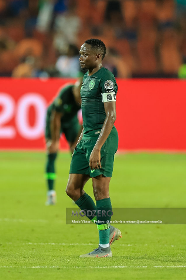 The AFCON tournament in Egypt has come and gone even as we look forward into the future for great days ahead of the Super Eagles.

With the draw for the 2021 AFCON qualifiers already released, the Eagles team must improve to attain the height expected of them when the qualifiers begin.

Nigeria has been drawn alongside Benin Republic, Sierra Leone, and Lesotho even as preparation must commence without any form of negligence to any of Nigeria’s opponents.

With things looking bright amid the pre-season performance and transfers of the Nigerian players abroad, we evaluate three Super Eagles players that must improve in the days ahead on the Nigeria shirt.

The Super Eagles skipper Ahmed Musa will be charged to lead the Nigerian attack while captaining the side as well following the exit of former Chelsea ace John Obi Mikel.

The exit of Mikel Obi means Musa will be the team skipper for as long as he can be relevant to the Super Eagles side.

However, the players’ performance left more to be desired on the Nigerian shirt during the AFCON as his crosses and final balls were poor by all standards. He failed to register a goal in Egypt.

If he must remain the skipper of the side with William Troost-Ekong and Wilfred Ndidi looking capable coupled with the talents like Samuel Chukwueze, Victor Osimhen, Henry Onyekuru, and Samuel Kalu that are on the rise at the moment he must put in a better shift for the Super Eagles.

If not Musa may find his place taken by another player especially with the emergence of attacking talents like Stephen Odey, David Okereke and Nigeria-eligible prospects like Ademola Lookman and Sheyi Ojo.

The Arsenal man must improve his gameplay if must remain a Super Eagles regular like his Uncle Austin Jay-Jay Okocha.

With talents like Kelechi Nwakali, Tom Dele-Bashiru and Ovie Ejaria coming through the ranks, the Arsenal winger must watch his career and improve for the good.

This is very needful for the player Iwobi even as he embraces the challenge that comes with Arsenal’s recruitment of Ivory Coast international forward Nicolas Pepe.

Alex Iwobi needs confidence and guile to achieve this feat for club and country even when we know he’s got the talent to flourish in the green shirt for the Super Eagles of Nigeria for sure.

The last but not least is Balogun who joined Premier League side Brighton & Hove Albion from Bundesliga side Mainz 05 in the summer of 2018.

He needs the playing tonic to get back to his best as the lack of first-team football is telling on his promising career.

His howler caused the Super Eagles at the AFCON 2019 in Egypt when his
side took on Madagascar. Rohr's team lost 2-0, a game which Nigerians would not want to remember.

His experience at 30 will be vital for the young Super Eagles side looking forward to something positive for their side in the future.