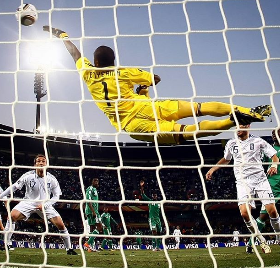 French Ligue 1 club Dijon have passed up the opportunity to sign former Super Eagles goalkeeper Vincent Enyeama.
The experienced glovesman trained with the Reds last week, with a view to signing a contract but failed to agree terms with the club.
Dijon want to sign another goalkeeper after the departure of their first choice goalie Bobby Allain, who joined Olympiakos as a free agent last week.
Nigeria's joint-most capped player in history with 101 appearances for the Super Eagles took to social media to thank Dijon for giving him an opportunity to train with the club.
''Thank you for the warm reception and the opportunity given to train to with your team,'' Enyeama posted on Twitter.
''It was a wonderful time that made me realize that I can still play at the highest competitive level. I wish the coach,the staff, the players a great season.''
2013 Africa Cup of Nations-winning goalkeeper Enyeama has been a free agent since August 2018 when he was released by Lille and has not played competitively for more than fifteen months.
Burgundy club, - Source: Topmercato.com - Article: https://translate.googleusercontent.com/translate_c?depth=1&hl=en&prev=search&rurl=translate.google.co.uk&sl=fr&sp=nmt4&u=http://www.topmercato.com/204228,1/dijon---vincent-enyeama-ne-signera-pas-au-dfco.html&xid=17259,15700022,15700186,15700191,15700256,15700259,15700262,15700265&usg=ALkJrhjbiPeYHHiJXBGRAaxyxkKbFdod9g
Ifeanyi Emmanuel