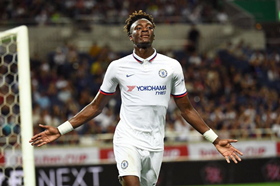 Former Chelsea manager Jose Mourinho has advised Frank Lampard to hand game time to Tammy Abraham in the upcoming season.
With FIFA banning the Europa League holders from signing new players until June 2020, their transfer plans have been disrupted and Lampard has to count on the return of Kurt Zouma, Michy Batshuayi and Abraham who were loaned out to English clubs last season.
If the pre-season matches are anything to go by, the Nigerian Federation target is in the plans of Lampard for the 2019-2020 campaign as he started against Barcelona, Salzburg and St Patrick's Athletic, and only missed the friendly with Kawasaki Frontale due to illness.
''You want a young striker – Tammy Abraham! He’s yours. He knows the club. He was made at the club, he was educated at the club,'' Mourinho said to Sky Sports.
''He was on loan, he played already some matches in the Premier League, he plays in the Championship but Championship at the highest level with the responsibility to play at a big club like Aston Villa. He’s ready.
''Do you need to buy a young centre forward? No! And Chelsea were criticised many times with the number of players they had on loan, more than 30 players, 40 players, but now the moment arrived and they have answers like nobody else could have.''
The 21-year-old Abraham has made two appearances for Chelsea in the Premier League, the last of which came against Leicester City on May 15, 2016.
Ifeanyi Emmanuel
Photo Credit : chelseafc.com