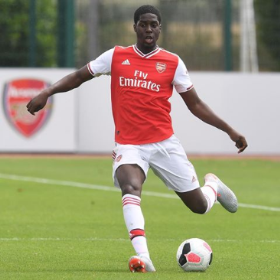 Nigerian defender Tobi Omole made his return from injury in Arsenal U23s latest pre-season match against Brentford B in Colney on Tuesday, July 30.
The promising youngster impressed as Arsenal U23s thrashed Brentford 5-0, the standout result in their pre-season matches so far and the first clean sheet since the appointment of Steve Bould as manager.
You could be forgiven if you forgot that Omole was still a player of Arsenal as the friendly against the Bees was his first match for the Young Gunners in over six months.
As a result of his injury, he was not considered by manager Unai Emery for the trip to Dubai in March and he was also left out of the squad for the pre-season tour to the United States.
Last season, Omole made nine appearances in total for Arsenal in the Premier League 2 and EFL Trophy.
If the 19-year-old is able to continue impressing for the North London club in the new season, then a first international cap for Nigeria youth team may be on the horizon.
Omole's good pal, Joseph Olowu has fully recovered from his injury and was in action in the friendly against Brentford.
Ifeanyi Emmanuel
Photo Credit : arsenal.com