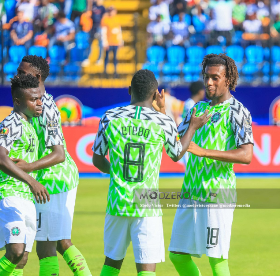 Alex Iwobi faces a race to be fit for Arsenal's opening match in the Premier League against Newcastle United on Sunday, August 11, allnigeriasoccer.com reports.
The Gunners number 17 is not expected at London Colney until next week due to international commitments with the Super Eagles at the Africa Cup of Nations in Egypt.
Iwobi has not taken part in Arsenal's six pre-season games so far and is set to miss their final friendly vs Barcelona on Sunday.
Based on FIFA recommendations, the Hale End Academy product should resume training on August 8 as players are given three weeks off to recharge their batteries after major tournaments.
But the rule is not cast in stone as the likes of Obi Mikel, Francis Uzoho and Samuel Kalu have resumed pre-season training with their respective clubs.
Iwobi was involved in all the seven matches played by the three-time African champions in Egypt and made 51 appearances for Arsenal in all competitions last term.
Ifeanyi Emmanuel