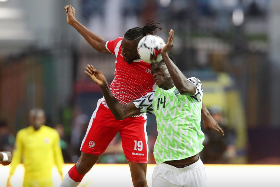 Belgian giants Anderlecht have decided to pull the plug on their plan to sign Nigeria international Paul Onuachu in the summer transfer window.
The FC Midtjylland star has been linked with a departure from the Superliga side with Anderlecht, Club Brugge and Racing Genk credited with an interest but none of the proposed deals has materialized.
According to Belgian newspaper Het Laatste Nieuws, Anderlecht are in advanced talks to sign Leeds United striker Kemar Roofe and this will effectively end their interest in Onuachu.
The Super Eagles star has two years to run on his current contract with FC Midtjylland who are looking to sell him to the highest bidder.
Onuachu netted 22 goals in 40 games in all competitions and provided six assists last season, helping Midtjylland win the Danish Cup and finish second in the league.
The FC Ebedei product entered the field in three games at the 2019 Africa Cup of Nations.
Igho Kingsley
Photo Credit : cafonline.com