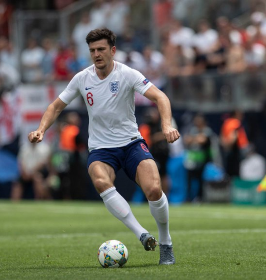 Manchester United are close to announce the signing of Harry Maguire having reached an agreement with Leicester City,  according to the Telegraph UK.
The England World Cup star has been left out of Leicester City's squad to face Atalanta on Friday night ahead of his imminent move to the Old Trafford outfit.
Maguire will cost an initial fee of £85 million pounds, which would make him the most expensive defender in history, surpassing Matthijs de Ligt, who moved from Ajax to Juventus for £77 million
Nigerians took to Twitter to shower praise on the club's executive for reaching such landmark agreement with the Foxes. Here are some of their comments on Twitter:

@tonye: "I'm happy with the Glazers for the first time".

@chinaza: "from Wan-bisaka to Harry Maguire, United defence is going to be hard next season".

@soji: " thanks to the Glazers, couldn't see this coming".

@sunday_wale: " Solskjaer has no more excuses to concede easy goals again, Maguire is set to join us".

@chidera: " hope Maguire live up to the hype, fee too high but great deal by every standard".