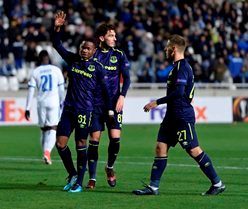 Ademola Lookman is open to the idea of switching his international allegiance from England to Nigeria after he was approached by the Nigeria Football Federation.
According to Sky Sports, the young winger could be the next youngster to follow the footsteps of Alex Iwobi, Ola Aina and Victor Moses who chose to represent the Super Eagles after featuring for England at youth level.
Lookman spent part of his summer vacation in Nigeria and was overwhelmed by the reception he received from his Nigerian fans.


The Nigeria Football Federation will need to get a clearance from FIFA before the winger becomes eligible to make his debut for the three-time African champions as he has competitive caps for England youth teams.
Lookman was a member of the Young Lions squad that won the 2017 FIFA U20 World Cup in South Korea.
An England U21 international, he completed a permanent transfer to RB Leipzig from Everton last month.
Ibukun Italoye
Photo Credit : evertonfc.com