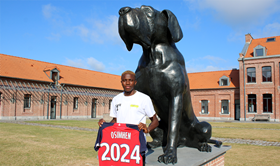 Victor Osimhen moved to French Ligue 1 side Lille as the transfer window continues in earnest.

With Osimhen’s move to the French side already finalized, we evaluate the three great legends that their exploits in France may well be inspiring the move for the young Nigerian striker.

The fair-skinned Nigerian international was a hit at Lille as he banged in goals to lift the French side during his playing days.

His performance and quality contributions to the club will not go unnoticed as he endeared himself to the club fans with an amazing display on the pitch.

This may have paved the way for another Nigerian striker Victor Osimhen to flourish at the club as they have moved straight to capture the services of the former U-17 Golden Boot Winner from Belgian side Sporting Charleroi in the ongoing transfer window.

The ex-Nigeria skipper has created awareness for Nigerian players abroad wherever he’s been to during his playing career.

His immense quality led to him been named twice as we have seen from his name.

Okocha’s performance in France enhanced the reputation of Nigerian players in the French League even as players like John Utaka, Simon Zenke and Brown Ideye have all played club football in France.

This gives Osimhen the level playing ground to succeed in France even as he has finalized paperwork to join up with Lille.

His understanding and reputation at Lille may have softened the ground for Osimhen to easily find his rhythm at the club.

It’s obvious the French side want to sign the prolific forward as Osimhen continues his development with regular football at French Ligue 1 side Lille.