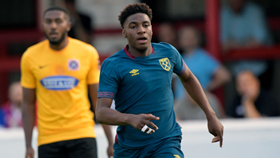 Dapo Afolayan was among the scorers as West Ham U23s thrashed Belgian club RSC Anderlecht  6-0 in their final pre-season friendly held at RSC Anderlecht Training Centre on Friday afternoon.
West Ham U23 boss Dmitri Halajko handed run-outs to three players of Nigerian descent in the shape of Ajibola Alese, Joshua Okocha and Afolayan.
First half goals from Powell and Afolayan gave the Hammers a comfortable 3-0 lead at half-time.
The Nigerian striker proved a handful for the Anderlecht defence in the first half and made it 3-0 in the 33rd minute, finishing from close range when a free-kick from a teammate found him.
Afolayan netted his first goal in pre-season as West Ham beat MFK Zemplín Michalovce in Slovakia last month.
The 21-year-old spent the second half of last season on loan at Oldham Athletic, making ten appearances in the League Two.
Ifeanyi Emmanuel
Photo Credit : whufc.com