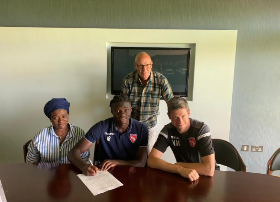 Allnigeriasoccer.com understands that highly-rated Morecambe youngster Ibrahim Bakare has pledged his international future to Nigeria over his country of birth, England.
The central defender's minders are believed to have opened a line of communication with the Golden Eaglets officials over the possibility of inviting him to the team ahead of the 2019 FIFA U17 World Cup in Brazil.
Born May 2002, Bakare joined Morecambe at the age of sixteen in August 2018 from Mass Elite Academy in London.
Prior to signing scholarship forms with The Shrimps, he trained with the youth teams of Chelsea and Watford
After a series of good performances for the youth teams of Morecambe, the promising defender inked his first professional contract with the club last month and was promoted to the first team for the 2019-2020 campaign.
Bakare is in possession of a Nigerian passport and willing to train with the Nigeria U17s before the World Cup.
He has been described as a two-footed central defender, comfortable on the ball, dominant in the air and an effective tackler.
Ifeanyi Emmanuel