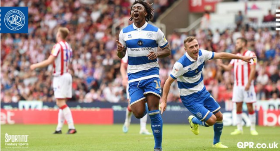 A round-up of Nigerian players that were on target for their respective clubs on the opening day of the Football League season on Saturday, August 3.
Nigerian players with dual nationalities and have played competitively for the senior national teams of other countries have been omitted.
At the bet365 Stadium, Queens Park Rangers beat a Stoke City side without Oghenekaro Etebo 2-1, with two Nigerians involved in both goals scored by the visitors.
QPR took the lead on 8 minutes as Bright Osayi-Samuel crossed for Jordan Hugill who made no mistake, before Eberechi Eze doubled the advantage seven minutes into the second half.
In the League One, former Crystal Palace striker Freddie Ladapo netted on his competitive debut for Rotherham United as they claimed a 2-1 win at AFC Wimbledon.
The former Flying Eagles invitee bundled the ball home in the 29th minute to make it 1-0.
An 81st minute penalty converted by John Akinde helped Lincoln City secure a 2-0 win against Accrington Stanley at Sincil Bank in Lincolnshire.
Still in the English third tier, Lagos-born striker Fred Onyedinma scored Wycombe Wanderers second goal in their 2-0 win over Bolton Wanderers. Adebayo Akinfenwa provided the assist.
A division lower, Salford City began their campaign in the League Two with a 2-0 victory against Stevenage thanks to a brace from Emmanuel Dieseruvwe.
Mani scored Salford City's first ever Football League goal in the 29th minute and increased their lead two minutes after the interval.
Ifeanyi Emmanuel
Photo Credit : qpr.co.uk