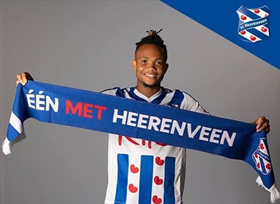 Nigeria duo of Chidera Ejike and Hamdi Akujobi caught the eye Sunday afternoon on their debuts for Dutch Eredevisie side Heerenveen at the Stadion Erve Asito in Almelo against home side Heracles as their new employers romped to a 4-0 win.
The victory thus ensured that Heerenveen assume leadership of the league so far in the first week of the season.

Both youngsters came off the bench respectively  in the second half with the score at 3-0, all goals having been scored in the first half but showed enough qualities to impress their appreciative fans.

Ejike replaced Jordy Bruijn in the 67th minute while Hamdi Akujobi was on from the bench seven minutes later in place of Ben Rienstra.

Akujobi hit a 79th minute shot but the ball was  parried by Heracles goalkeeper Janis Blaswich.

He brought down in the middle of the park as he bore down on goal towards the end of the game but it was Ejike who grabbed Heerenveen's fourth goal from a counter attack from their half.

The former Valerenga of Norway winger who scored seven goals in the first half of the year in all competitions for his former side beat his marker to dispatch the ball at the blind side of the keeper, Blaswich, in the third minute of added time.