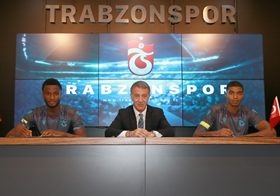 Trabzonspor new signing John Obi Mikel has chosen to wear the same shirt number he used during his time at Chelsea.
The former Nigeria captain will be wearing the number 12 on the back of his jersey should he make his competitive debut against Sparta Prague in the Europa League qualifying round on Thursday.
Mikel agreed a two-year deal with Trabzonspor on July 1 with option for another year but only resumed training with the club last week due to international commitments with the Super Eagles at the 2019 Africa Cup of Nations.
When the 32-year-old made his professional debut for Lyn Oslo, he wore the number 20 kit for the Norwegian club.
Having worn the number 10 jersey for the Golden Eaglets at the 2003 FIFA U17 World Cup, he was allocated the number 9 at the 2005 FIFA U20 World Cup because his favorite shirt number was already taken by team captain Isaac Promise.
Mikel played with the number 10 at Tianjin Teda while he sported the number 2 at his last English club Middlesbrough.
Ifeanyi Emmanuel
Photo Credit : trabzonspor.org.tr