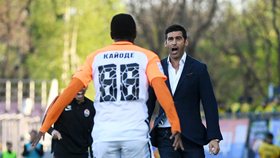 Turkish Super Lig side Kayserispor are closing in on a deal to sign Nigeria international Olarenwaju Kayode.
Sports daily Fanatik writes on its website that the former Manchester City striker is set to be unveiled by Kayserispor this week subject to the player passing a medical.
It is claimed that Ukrainian champions Shakhtar Donetsk have agreed to loan out Kayode to the Turkish side for the whole of the 2019-2020 season.
The former Golden Eaglets and Flying Eagles star joined Manchester City in the summer of 2017 following his exploits in the Austrian Bundesliga with Austria Vienna but departed the Premier League champions a year later without playing an official game
Having impressed while on loan in the second half of the 2017-2018 campaign, he was signed on a permanent basis last summer but struggled for game time last season.
Kayode has a contract with Shakhtar Donetsk until June 30, 2023.
Ifeanyi Emmanuel
Photo Credit : shakhtar.com