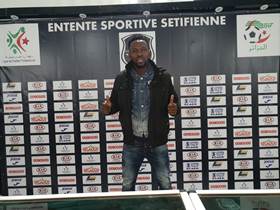 Allnigeriasoccer.com can exclusively report that Ifeanyi Ifeanyi and ES Sétif have mutually agreed to terminate the contract of the Nigeria international, allowing the defensive midfielder to join a new club as a free agent even after the close of the summer transfer window.
The 23-year-old had to end his cooperation with the 2014 CAF Champions League winner dues to unpaid wages but he was paid some of his outstanding entitlements before canceling his contract with the club on Monday.
Ifeanyi inked a three-year deal with the Black Eagles in January 2019 and would have remained at the Algerian Ligue Professionnelle 1 side until at least December 2021 if both parties had honoured the agreement.
According to the player's agent, Johnson Nwankpa of JCN-Johnson Sports Management, the midfielder is on the radar of clubs based in Saudi Arabia, United Arab Emirates, Poland and Greece.
Ifeanyi was an influential member of the Flying Eagles squad that won the 2015 Africa U20 Cup of Nations and represented the country in the World Cup held in New Zealand that same year.
He represented Mountain of Fire and Akwa United before moving to Algeria.
Ifeanyi Emmanuel