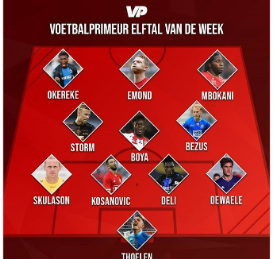 Nigeria U23 international David Okereke has been named in the Belgian First Division A Team of the Week for the second round of matches.
Voetbal Primeur has selected the outstanding players in its ceremonial eleven and the Club Brugge record buy was the only Nigerian player listed.
In a 4-3-3 formation, the Dream Team VII star occupied the left side of attack
Apart from Okereke, Emmanuel Dennis (Club Brugge), Imoh Ezekiel, Abdul Ajagun (both Kortrijk) and Stephen Odey (Racing Genk) were in action for their respective clubs in the latest round of matches.
The pacy striker cum winger was involved in three goals as Club Brugge hammered St.Truiden 6-0, scoring two goals and setting up another before the end of the first half.
Okereke is in line to make his debut in the qualifying rounds of the Champions League on Tuesday as he has been included on the 20-man provisional roster against Dynamo Kiev.
Igho Kingsley