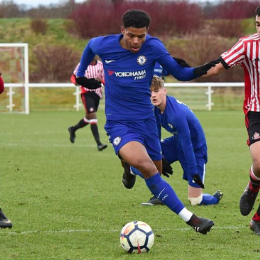 Europa League holders Chelsea have unveiled the jersey numbers for the development squad ahead of their season opener against Swindon Town in the EFL Trophy on Tuesday evening.
Midfielders Tariq Uwakwe and Faustino Anjorin will wear the number 46 and number 55 shirts respectively while Ola Aina's sibling Jordan has been allocated number 54 for the 2019-2020 campaign.
Last season, Uwakwe played with the number 57 shirt and Anjorin was allocated the number 64 kit.
Fullback Jordan Aina has been handed the 54 jersey which was worn by Netherlands U19 star Juan Castillo in the 2018-2019 season.
The three teenagers are classed as U21 players and will wear the new jersey numbers if they make their first-team debuts this season in the Premier League, FA Cup or League Cup.
While Uwakwe and Anjorin have debuted in the EFL Trophy, Jordan Aina is hoping to make his maiden appearance this season.
Ifeanyi Emmanuel
Photo Credit : chelseafc.com