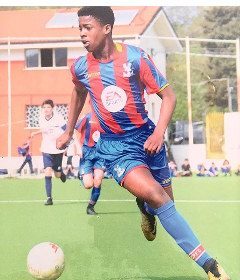 Allnigeriasoccer.com has been told the English Football Association are ahead of their Nigerian counterparts in the race for the services of promising striker Victor Akinwale.
As England look to re-establish themselves on the international scene after surprisingly missing out on the U17 and U20 World Cups,  the FA has identified the Crystal Palace youngster as one for the future and invited him to an England U16 training camp last month.
Touted as one of the best young players at Crystal Palace Academy, he was outstanding as the Eagles won the national Super Floodlit Cup final for the first time in their history in May 2019.
Akinwale netted a brace as Crystal Palace U15s thrashed Chelsea 3-0 in the regional final.
He has been described by his minders as a striker who is dynamic, powerful, good in hold-up play and a good finisher .
Former Crystal Palace winger Victor Moses represented England U16s before committing his international future to Nigeria.
Ifeanyi Emmanuel
Photo Credit : instagram.com/vblr9