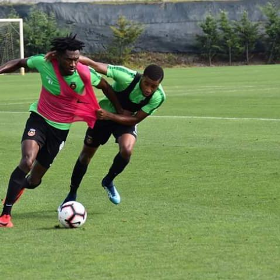 Nigeria U23 international Kelechi John is being tipped to join former Chelsea midfielder Kylian Hazard at Cercle Brugge before the close of the summer transfer window.
Allnigeriasoccer.com has been informed that Cercle Brugge are in advanced negotiations to sign Kelechi from Rio Ave, with a season-long loan deal being mooted for the versatile defender.
The 20-year-old had attracted interest from an unnamed Turkish club but chose to join Cercle Brugge where his development will be faster.
The leadership of Rio Ave recently held talks with the Dream Team VII star and informed him that he has outgrown their U23 team.
Kelechi was instrumental for Rio Ave U23s in the Liga Revelacao last season and was recognized for his outstanding performance after he was nominated for the Best Player Award in the regular season by the  Professional Football Players' Union (SJPF).
He made his debut for Nigeria's Olympic team in an U23 AFCON qualifier against Libya back in March.
Ifeanyi Emmanuel