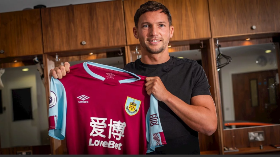 With the summer transfer window closed for business for Premier League and Championship clubs, five players have departed Chelsea on loan in search of regular game-time.

Drinkwater, who joined the Blues from Leicester City in 2017, failed to hit the ground running under Antonio Conte and Maurizio Sarri. He managed just 23 appearances in all competitions under both managers.

The England International is also surplus to requirements under Frank Lampard and he was allowed to join the fellow Premier League outfit ahead of the 2019-20 season.


As for Chalobah, the England U20 international isn't in Lampard's plans for the upcoming season and he was eventually released by the Blues to continue his development with Huddersfield Town who were relegated from England's top-flight League last season.
The 20-year-old defensive midfielder is expected to make his debut for  Jan Siewert's team against QPR with number eight shirt on Saturday.
Grant and Drinkwater's loan deals will expire in January 2020, while the remaining three players embarked on season-long loan moves.
Ibukun Italoye
Photo Credit : burnleyfootballclub.com