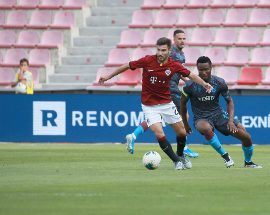 Ex-Super Eagles captain John Obi Mikel made his competitive debut for Trabzonspor as they played out a 2-2 draw against Sparta Prague in a Europa League third qualifying round match at Generali Arena on Thursday evening.
The Chelsea legend was named in the starting line-up and was in action for forty-five minutes before he was replaced.
Mikel was yellow carded in the 32nd minute after conceding a free-kick for a foul on  Sparta Prague's number nine Guélor Kanga.
The home team led 2-0 through goals from Nhamoinesu and Kanga with 22 minutes remaining on the clock.
Sparta Prague fell apart in the closing minutes as Caleb Ekuban halved the deficit on 84 minutes, before Soerloth, who replaced Mikel, scored the equaliser for the Turkish Super Lig side.
Mikel penned a 2+1 year deal with Trabzonspor last month after spells with Norwegian, Chinese and English clubs.
Ifeanyi Emmanuel
Photo Credit : trabzonspor.org.tr
Latest News