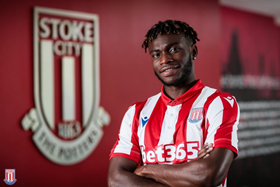 Stoke City completed the signing of Nigeria U20 invitee Ashinme Kigbu before the close of the transfer window.
The Potters have snapped up the highly-rated central defender from Austrian Bundesliga side Wolfsberger AC.
A product of Manchester City Academy, Kigbu is returning to England a year after he left the Citizens for Wolfsberger AC.
The 20-year-old left Manchester City in search of first team football and made five appearances for Wolfsberger AC prior to his departure.
Born in Jos to Nigerian parents, Kigbu has earned two caps for England 18 national team against Italy and Sweden in 2016.
Nigeria international Oghenekaro Etebo plays for the first team of Stoke City and Kigbu will be hoping to follow in his footsteps.
Ifeanyi Emmanuel
Photo Credit : twitter.com/Propelsports_