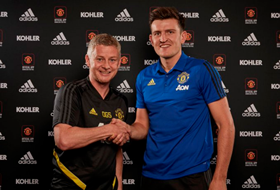 It is difficult to truly know whether a club has had a good transfer window before the new arrivals actually start playing. But Manchester United fans will not be confident that this was a good summer.


Some transfer targets were brought in, but many others were not, and there are now some major holes in the United first-team squad.
Betting sites are now allowing United’s Premier League odds to drift, and even a top-six finish is not guaranteed.
The plus points are that in Dan James, Aaron Wan-Bissaka, and Harry Maguire, United now have three excellent new players.
Maguire and Wan-Bissaka will lead a much strengthened defence, while the pace of James will trouble many opposing teams this season.
But even with these positives, there are caveats. Maguire was brought in for £80 million, an amount Leicester asked for initially, but United vainly attempted to negotiate on for two months before paying anyway.

Paulo Dybala and Christian Eriksen were both linked with moves to the club, but United seemingly concentrated on getting Maguire in and left other deals to fall away.

Selling Romelu Lukaku without a replacement is also a huge problem. Various names were put forward  as attacking targets — such as Mario Mandzukic — but for the time being, United will need to depend on 17-year-old Mason Greenwood starting life off in the Premier League with a bang.

United did manage to keep Paul Pogba at Old Trafford when he looked almost certain to leave. But by taking away many of the players that he can help to score the goals to give United the points, how long will the French World Cup winner stay happy?

Ole Gunnar Solskjaer now has a job on his hands to bring in the new recruits seamlessly, keep his existing players happy, and make Manchester United a team that can push for Champions League qualification.


Thanks to the dealings in this transfer window, all that seems unlikely to happen now.
Ifeanyi Emmanuel
Photo Credit : manutd.com