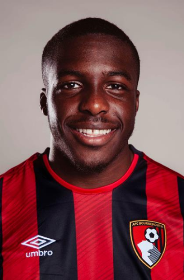 Bournemouth have confirmed their squad list ahead of their opening game of the new Premier League season against Sheffield United at the Vitality Stadium on Saturday, August 10.
Nnamdi Ofoborh and three other players classed as U21s have been allocated jersey numbers, with the Flying Eagles midfielder switching to the number 38.
Last season, the former Tottenham Hotspur youth-teamer wore the number 59 for the Cherries first team when he sat on the bench for games against Fulham, Spurs, MK Dons, Blackburn Rovers and Norwich City.
Jordon Ibe has retained the number 10 jersey he first wore last season, while Dominic Solanke is Bournemouth's new number 9 for the 2019-2020 campaign.
Midfielder Philip Billing has been allocated the number 29 following his move from Huddersfield Town in the summer transfer window.
The Denmark U21 international wore the number 29 in three successive seasons at Huddersfield before moving to number 8.
Igho Kingsley
Photo Credit : afcb.co.uk