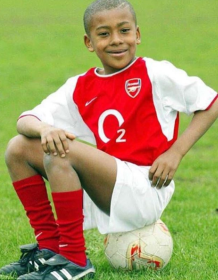 Nigeria international Alex Iwobi has taken to social media to publish an emotional farewell message to everybody associated with Arsenal after sealing a deadline day move to Everton.
The Hale End Academy product recounted some of the highlights from his fifteen-year association with The Gunners, including his maiden goal at the Emirates against Watford and his last strike which came against Chelsea in last season's Europa League final.
In a message to his 2.055 million followers on Instagram and Twitter, Iwobi stated : ''I Grew Up Dreaming Of Playing For Arsenal, Following In The Footsteps Of Some Of My Hero’s. I’m Proud To Say That @ 23 I’ve Achieved One Of My Dreams.
''From Playing For Arsenal Kids To 149 Senior Appearances. It Was An Honour To Play For The Club I Supported As A Boy.
''I’ve Enjoyed Every Minute Of It. So Many People To Thank, Far Too Many Individual Names To Mention But I Thank You All ! ''
He added : So Many Great Moments, From Scoring My First Goal At The Emirates To Scoring My Last Goal In Baku. You’ve All Played A Big Part In My 17 Fantastic Years.
''Special Thanks To The Fans, My Team Mates, The Support Staff, My Coaches Arsene Wenger and Unai Emery Who Put Faith In Me And Gave Me The Opportunity to Grow As A Player And A Man.
''BIG Love To A Special Club. Arsenal Will Be Forever In My Heart. ❤️ #Gunners #BIG17''.
In a separate post on Instagram, Iwobi spoke his first words as an Everton player and said : ''Really Happy To Be An @everton Player. The Time Is Right For A New Challenge, After Speaking With The Manager And Key People At The Club, I’m Super Excited About This New Chapter In My Life. I Can’t Wait To Get Started! I Look Forward To Being A Part Of The History Of This Great Club. Let’s Go 💪🏽🔵. #NaijaBoyIsHere🇳🇬 #BIG17''.
Ifeanyi Emmanuel