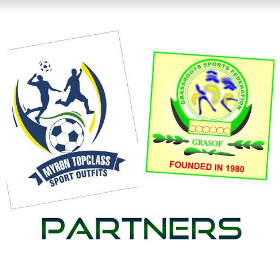 The Grassroots Sports Federation in the South South region has partnered with one of Nigeria's most active sports representative firm, Myron Topclass Sport Outfits for the third edition of the Udom Grassroots Football competition (Udom National Under 17 Championship for youth teams across the country)


The tournament is scheduled to begin on September 14th, and run through September 22nd, 2019 across different match venues in the country.
Organizers have also confirmed that close to N5 million is up for grabs as prize money.
Myron Topclass Sport Outfits is expected to play a consultancy role, as well as project and publicize the event.

As the Chief consulting firm, it is also the duty of Myron Sports to identify the raw talents that will emerge from the competition, and put them on the right path as they aim for a career in Football.

The firm recently concluded a mentorship programme in Lagos tagged "Summer Camp With Etebo" , in conjunction with SpringSoca Academy where the trio of Super Eagles players, Etebo Oghenekaro, who is also a client of the firm, as well as John Ogu and Victor Osimhen were present.

Principal Officer of Myron Topclass Sport Outfits, Mr. Eddie Iseri Ogbemudia said "This is another opportunity to develop Football, from our end, we have always done that and it is quite obvious that our contributions towards the development of the game has not gone unnoticed".