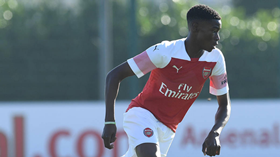 Nigerian winger Ryan Alebiosu, who models his game after Alex Iwobi, has been handed his full debut by Arsenal U18 manager Ken Gillard for his side's U18 Premier League opener against Chelsea at London Colney on Saturday.
Alebiosu is making his first start for the young Gunners in the league after nine appearances off the bench during the 2018-2019 season.
The second year scholar is joined in the starting line-up by first year scholars Miguel Azeez and Mazeed Ogungbo, while Nathan Oyedeji is on the bench.
Ola Aina's younger brother, Jordan has not been selected in the Chelsea squad for this fixture.
Of the three aforementioned Nigerian players representing Arsenal, only Alebiosu has not scored in the U18 Premier League and he'll be hoping to open his account and cement his place in the side this season.
After 20 minutes played in the first half, Chelsea were leading 1-0 courtesy of  Armando Broja's goal.
Ifeanyi Emmanuel
Photo Credit : arsenal.com