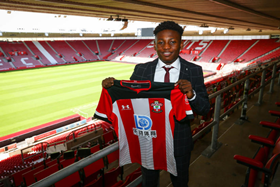 Former Anderlecht super kid Kazeeem Olaigbe has made his debut for Southampton, going the distance as they were beaten by Aston Villa in the U18 Premier League on Saturday afternoon.

The highly-rated teenager, who penned a two-year scholarship with The Saints in the summer, took his place on the left side of attack.

Republic of Ireland youth-teamer of Nigerian descent, Roland Idowu also played the full game for Southampton and David Agbontohoma joined the fray in the 90th minute.

The home team were trailing 3-0 at the Staplewood Training Ground until Braithwaite reduced the deficit in the 81st minute, with Idowu providing the assist for his goal.

It was a nervy ending for Aston Villa as Idowu netted his first of the season to make it 3-2 with seven minutes left on the clock.

Paul Hardyman's side travel to Swansea City in their next fixture on Saturday, August 20.