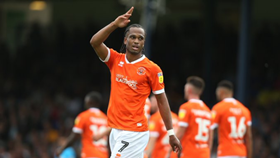 Catch up on the Nigerian players that were on target for their respective clubs in the EFL Championship, League One and League Two on Saturday, August 10.
Former Arsenal youth-teamer Chuks Aneke was on the scoresheet for Charlton Athletic in their 3-1 win against Stoke City in a Championship clash at the Valley.
The number ten came off the bench in the 69th minute and capped his debut with a brilliant goal as he struck the ball home from close range with 15 minutes left.
A division lower, Blackpool provisionally top the standings after beating Southend United 3-1 at Roots Hall with ex-Aston Villa starlet Nathan Delfouneso netting a brace for the visitors.
Delfouneso got in behind and lifted the ball over the goalkeeper and into the far corner to double Blackpool's lead in the 12th minute and made it 3-0 with a simple finish at the back post on 37 minutes.
In the League Two, Port Vale and Northampton Town shared the spoils in a 1-1 draw at Vale Park.
Former Liverpool winger David Amoo headed home to open the scoring in the 26th minute. It was his home debut for Port Vale.
At the County Ground, ex-Arsenal schoolboy Olufela Olomola opened his account for new club Carlisle United but it was not enough as they lost 3-2 at Swindon Town.
Six minutes into the second half, Olomola was there to slot home after a lovely assist from McKirdy.
Finally, Emmanuel Osadebe made his home debut for Macclesfield Town as they registered a 3-0 win against Leyton Orient at Moss Rose Ground.
The summer signing doubled the home team's advantage in the 68th minute.
Ifeanyi Emmanuel