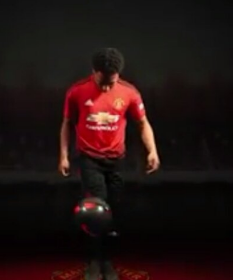 Nigerian striker Dillon Hoogewerf is confirmed to be a new player of Manchester United, having made his competitive debut for the youth team of the Old Trafford outfit in the U18 Premier League on Saturday, August 10.
Hoogewerf had announced his transfer to the Red Devils in June but his name was missing from the list of first year scholars when it was unveiled by the club last month because his international clearance was not received.
The former Ajax Amsterdam wonderkid came off the bench in the 67th minute along with Shola Shoretire as United recorded an impressive 3-0 win against Sunderland at Aon Training Complex.
The 16-year-old Hoogewerf, who replaced Maxwell Haygarth, wore the number 14 shirt.
After his introduction, Neil Ryan's side came close to scoring a fourth goal when Anthony Elanga was sent through on goal by a defense-splitting pass from Hoogewerf but the Sweden youth international's shot was saved by the Black Cats goalkeeper.
Playing against bigger and more physical opponents, he showed deft touches with an eye for a pass and ability to drift into space in his maiden appearance in the U18 Premier League.
Charlie McCann, Elanga and Charlie Wellens were on target for Manchester United.
Ifeanyi Emmanuel
Photo Credit : instagram.com/dillonhoogewerf