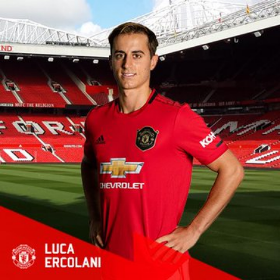 Italy U20 star Luca Ercolani has confirmed that he has signed a new deal at Premier League side Manchester United.
The central defender joined Manchester United from Italian outfit Forli in 2016 following a successful trial.
Ercolani posted on Twitter : ''I am honoured to have signed a new contract with @manchesterunited It has been a while now and I am glad to still represent the club.
''Thanks, to the people that have been close to me in the last three years during joys and bad moments. Time to push 🔛''.
Last season, the 19-year-old represented United in the Premier League 2 and UEFA Youth League, making 13 appearances in total.
Ercolani was offered a new contract at the end of the 2018-2019 season following his brilliant displays for the youth teams.
Igho Kingsley
Photo Credit : Twitter/ercoUT6