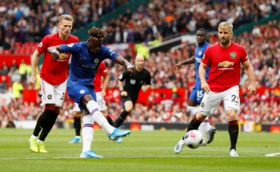 Chelsea striker Tammy Abraham is partly to be blamed for one of Manchester United's goals in their 4-0 thrashing of Chelsea on Sunday at the Old Trafford according to former Arsenal striker Ian Wright in his analysis of the game on Sky Sports.

Both Premier League heavyweights clashed in what is the first between the 'top six' rivals and despite starting the game with promise, Chelsea capitulated to lose by the wide margin.

"Abraham had a brilliant, instinctive strike. He really could have bent it," the onetime Crystal Palace man noted of the cracking shot let fly by the Chelsea youngster which came off the post.

"For  Anthony Martial's goal, you (referring to Abraham) can't get too tight on Harry Maguire. You have to give him that yard," the legendary Premier League star stated.

Abraham was dispossessed of the ball by the £80 million acquisition from Leicester City who laid the ball to Scott McTominay.

The midfielder found Marcus Rashford whose pace was too much for the chasing Chelsea players. The ball was eventually crossed inside the box and France international Martial swept it home.

Abraham scored 26 goals in all competitions for promoted Aston Villa whom he helped deny a Derby County side then coached by Frank Lampard from gaining promotion to the top flight in the playoff final on May 27.