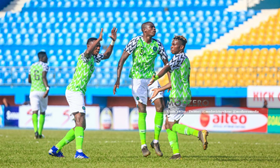 Lille new signing Victor Osimhen has been named to the Team of the Week in the French Ligue 1 for the opening round of matches.
Football statistics website Whoscored.com has picked the eleven most outstanding players with the Nigeria U23 international making the cut.
Osimhen made his presence felt in Lille's 2-1 win against Nantes at the Stade Pierre-Mauroy (Villeneuve d'Ascq), netting the game-winner in the 80th minute after he had opened the scoring in the first half.
The former Wolfsburg striker had a game-high four shots, won one foul, made one key pass and completed one dribble vs Nantes.
In Belgium, Dream Team VII teammate David Okereke was selected by Voetbalkrant.com in its Team of the Week after opening the scoring for Club Brugge in their 2-0 win at KV Oostende on Saturday.
He is the joint highest goalscorer in the Belgian First Division A with four goals from three games.
Ifeanyi Emmanuel