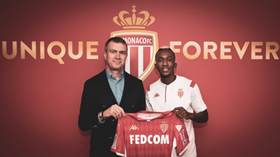 Super Eagles winger Henry Onyekuru completed his move to AS Monaco from Everton on Monday after penning a five-year contract with the Ligue 1 side.

The 22-year-old took to social media to send a farewell message to Everton and thanked the club for giving him the opportunity to join Galatasaray on loan last season.

The AFCON Bronze medalist netted 16 goals in 44 matches in all competitions to help Galatasaray win the Super Lig and Cup, and he holds fond memories from his time in Turkey.

He tweeted: "I want to thank @everton for the opportunity and making it possible for me to experience the best year of my career at @galatasaray.

''My time in Turkey was nothing short of amazing! The supporters, the club and my teammates made me feel at home from Day 1! We made history Thank U.''

Onyekuru joined Everton in the summer of 2017 but couldn't make his debut for the Toffees due to work permit issues and he was eventually sold by the Premier League outfit after two years.
Ibukun Italoye
Photo Credit : AS Monaco