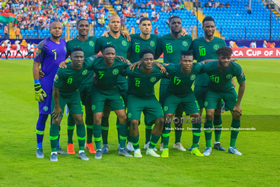 The Ukrainian Association of Football (UAF) have confirmed via their official website that the Ukraine National Team will face three-time African champions Nigeria in an international friendly next month.
Nigeria will face the Ukrainians for the first time in history on September 10, 2019, and members of the UAF Executive Committee approved the Dnipro-Arena as the venue for this match.
Explaining why the Dnipro-Arena was picked as match venue, UAF President Andrey Pavelko stated : ''Considering the postponement of the friendly match with the Turks, which was supposed to take place in Dnipro in November last year, such a decision is absolutely logical and fair.
"This match will be the best gift to Dnipro, the main outpost of Ukraine in the east, and the first national team match in the city in the last 10 years."
The Dnipro-Arena staged the 2010 FIFA World Cup qualifying match between Ukraine and England.
Ifeanyi Emmanuel