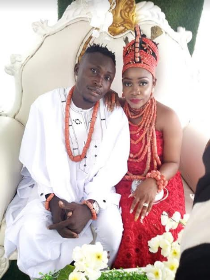 Former Warri Wolves and Enyimba International attacker Joseph Osadiaye has quit bachelorhood after tying the knot with his longtime girlfriend Sarah.
The event which took place at Ekosodin, Benin City was graced by high profile personalities in the football world, including administrators and his former teammates Monday Osagie who is based in Bangladesh, Festus Austin of Rivers United and Omofoman Freedom.

Others are Solomon Okpako of Rangers, players of Bendel Insurance were also present.

The couple dressed in the traditional Edo attire for the engagement as both love birds are from Edo state.

Osadiaye was part of the Enyimba International FC team that won the 2018/2019 Nigeria Professional Football League last season in Lagos.

He is currently being linked to several clubs home and abroad after he opted not to renew his contract with the People's Elephants.

He is the recent notable Nigerian footballer to walk down the aisle, going after Super Eagles Striker, Henry Onyekuru who also got married last month.