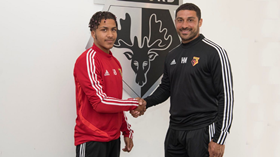 Premier League side Watford have confirmed that Nigerian midfielder Jayden Bennetts has committed his future to the club by penning a new deal.
The highly-rated teenager has signed his first professional contract with the club.
Though the length of contract signed by Bennetts has not been disclosed, allnigeriasoccer.com understands that the contract will be for an initial period of one year and the Vicarage Stadium outfit have retained the option to extend the agreement by an additional twelve months.
Jayden Bennetts is highly regarded at Watford and trained with their first team before the start of the new season.
The 18-year-old was an influential member of the Watford side that reached the semifinal of the prestigious FA Youth Cup in the 2018-2019 campaign.
He was invited to train with the Flying Eagles in Germany ahead of their trip to Poland for the 2019 FIFA U20 World Cup.
Ifeanyi Emmanuel
Photo Credit : watfordfc.com